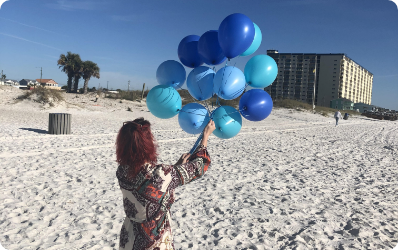 On December 22nd last year, a tradition that I started at my son, Samuel’s funeral 12 years ago was carried on. It was so beautiful and unforgettable.
At my son’s funeral in 2009, I had 63 balloons released to the song “Amazing Grace” which represented the 63 days he was here on earth before leaving my arms to enter the gates of Heaven.
This past year, I released 12 beautiful blue balloons since Samuel would have been 12 years old.
It was breathtaking and divine. At one point, the blue balloons even formed the letter “S”. At that very moment, I dropped to my knees as my heart exploded wishing I could touch him. Hold him. Sing to him. Or even smell him.
While still on my knees in the soft white sand, I cried. I laughed. I asked the Lord a million questions. But, most importantly, my loved ones held me while I wept many tears, embraced me and showed me their infinite love while I shared his intense pregnancy and his birth story with them.

There’s never a timeline for grief. Everyone mourns differently. You don’t get over a loss but you will find a way to live through it. I have found purpose. I am stronger. I treasure life even more. Samuel’s legacy lives and is in my heart and divinely inspired life forever.