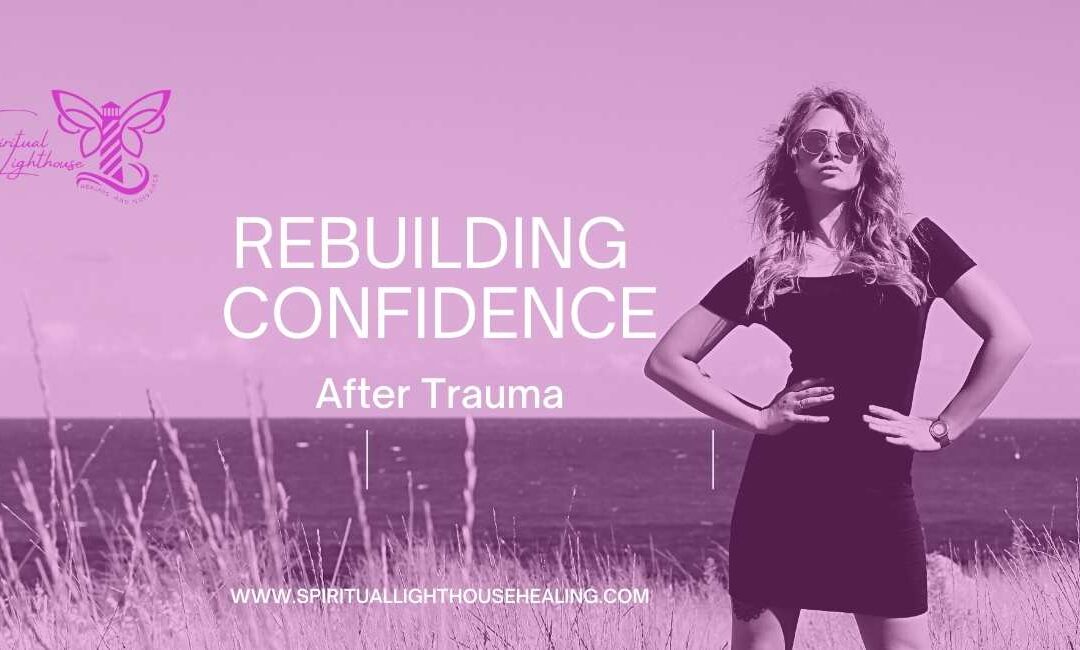 Rebuilding Your Confidence After Trauma

I want to share with you the steps I took to rebuild my confidence after the trauma of abuse, rape, and losing my first-born child to SIDS.

Confidence is a crazy thing. It takes forever to build it and then it can be shattered in a matter of minutes. When I was a young child, my dad would always tell me the importance of confidence. That confidence can pave the way for your success in life. That true confidence can bring you financial security, as well as emotional security. Being that I believed and trusted my father, I have been working on building my confidence since I was a little girl.

When it was time to go off to college, I thought not only had I built myself into a strong, confident woman, but I had also convinced myself that nothing or no one could ever steal my confidence away from me. I was ambitious. I had big plans and nothing would stand in my way (or so I thought).

Sadly, all the confidence I had worked so hard to build up in myself as a child, was shattered the night I was gang raped and my virginity was stolen from me my freshmen year of college at Florida State University.

That night my esteem and the confident and vibrant girl I had been was obliterated. After my rape, I reverted back into a scared little girl. I didn’t want to tell anyone what had happened to me that horrific night because I thought deep down that the rape was all my fault. I had even convinced myself that I deserved to be raped by those fraternity brothers because I had been wearing a tight, little black skirt while drinking heavily with several of my sorority sisters that very evening.

When I finally built up the confidence and courage to share what had happened to me at that fraternity brother’s apartment, no one believed me at first. Maybe some still don’t.

I wish it wasn’t my truth but I share it openly now  because I need you to know that if you have experienced this sort of horror. It’s not your fault and you did not deserve it, and it is possible to heal the emotional pain it has caused you. I am living proof.

That sexual assault certainly impacted me negatively on multiple levels but at the time I chose to pick up the pieces of me that were shattered by this horrific act and move forward. Time passed and I slowly began building up my confidence again. I graduated college, went off to grad school, and even landed an amazing job right after I received my graduate degree.

Not long after that I met the man who I thought, at the time, was the true love of my life. That man and I went on to get married and have a little boy together. But our life was about to be shook, merely nine weeks after our son Samuel was born I found him lifeless in his crib. My life changed for the worst that very day.

Once again another trauma shattered all of my confidence I had worked so hard to rebuild.

However, this time was much worse. I didn’t even want to live anymore after Samuel’s death. All I could think about, night and day, was how am I ever going to survive the death of my son. Rebuilding my confidence was the last damn thing on my mind but I knew I needed it to rise up from the pit I was in.

I needed the confidence to redefine who I was now that Samuel was gone.

I needed the confidence to keep going when the pain of life without my son made the future blurry and it hurt to go on without him.

I needed the confidence to let go of what was and embrace what was to be. It would be different but I had a small hope deep down that I could be ok again.

In time I began to heal from the loss of my child. The steps I took are laid out in this blog post on reaching rock bottom and I have also created a program to help others heal and find happiness faster than it took me.

I was bound and determined to rebuild me confidence yet again. However, sadly, this time the confidence I had built after the loss of my son was short lived.

My husband at the time, the one I lost my baby boy with, went straight towards drugs and alcohol to self soothe his pain after our son’s death, and became quite abusive towards me.

Fear of the unknown kept me in a bad situation for too long.

Looking back, all the red flags and signs were there and I should have divorced him the first time he got physical with me, but I didn’t. I got into my head, yet again, and lured myself into believing that I deserved all the abuse I was receiving from him. Most of the abuse was emotional, mental, and psychological which was honestly far worse than the physical abuse I endured during our marriage.

At this point, I was lost. I had reached my breaking point. I didn’t want to live anymore and all I wanted to do was to commit suicide. I felt like a worthless mother, wife, and friend. My confidence was gone and I felt at this point it was never coming back.

I no longer accepted who I was because I had shame about all of the terrible things that had happened to me. I had these two beautiful children that I loved with all of my heart but my esteem was so low and my self love was non existent. I had become a shell of a person going through the motions.

I didn’t know how to face the future anymore as I could hardly get out of bed or survive through the day. I had reverted back to being a scared, little, helpless girl and this was not who I wanted to be. There was the me I wanted to be trapped inside screaming and praying for things to change.

Just a couple of nights later, merely just days after finding out I was going to have another baby, I walked in on my now ex-husband with a rolled twenty-dollar bill, snorting cocaine off the bathroom vanity, while our two-year-old daughter was in the bathtub.

I was done. Enough was enough.

I had reached my rock bottom and I was done tolerating a life with him.  I made a decision in that moment that I was no longer going to put up with his mistreatment and abuse

Nor could I continue to expose my children to this mess. I had taken the abuse because my confidence and self respect was completely shattered, but they deserved better. I deserved better too!

I no longer felt safe so I grabbed my baby, Lillian, out of the tub and called the cops that very moment. He was arrested that night and I filed for divorce the very next day.

Almost immediately my confidence started to improve. I felt like a brave and strong momma because even though I was four months pregnant, with two toddlers at my feet, and I realized the moment I left I was going to be single mommin’ it quite possibly for a lifetime. It didn’t scare me. I knew with God by my side, I could do it.

My confidence began to sky-rocket.

I had hope for the future again.

I felt capable of managing whatever life threw at me.

I knew that no matter what, God had me held and had incredible plans for me.

I share all of this with you to show you that you can go through tremendous pain and heartache throughout your life, and your confidence completely shattered and stolen from you a million times over, and still find a way to rebuild your confidence, your self-worth, and your ability to love life like you have never loved it before.

It is never too late to feel like a confident, brave, independent woman that the good Lord created you to be.

As you can see, my sweet friend, I have had some terrible things happen to me throughout my lifetime thus far and more than likely you have too. But, I promise you, that together we can rebuild our confidence exactly where we want it to be.

Rebuilding Your Confidence After Trauma.

I have made a simple list of what it takes to rebuild your confidence based on what I had to do to get where I am today.

1.  Let go of the past and control your present.

Remember how I told you after my rape I had to CHOOSE to move forward? Nothing could change the fact that I had indeed been gang raped, but I had full control over what you chose to do next. And for me I chose to move forward and rebuild my confidence to be the strong, independent, and brave woman I desired to be.

2. Stop tolerating a life that is less than you deserve.

You do have a choice. You don’t have to let people treat you badly. Don’t wait until you’ve reached “the last straw” to assess your life. And if the people around you are tearing you down it is perfectly ok to put up a boundary and stop the abuse.

3. Have faith that you will be ok.

I was pregnant with two toddlers and it was scary to leave my husband at the time, but I had to trust that God had a plan for me that was better than this. AND HE DID!

He sent my husband of over 8 years to me while I was still pregnant with my ex husband’s child and I have more blessings than I can count because I rebuilt my confidence and got the support I needed to heal.

Also, if you are looking for a group of amazing and supportive women join my free Facebook group, where I give tips, encouragement and resources to feel fully alive and live your best life.